In December 2018, 25 years after Campsfield immigration detention centre opened near Oxford, it was finally closed.

Over 25 years, the Campaign to Close Campsfield and End All Immigration Detention (CCC) did a lot of work which you can read about on this website.

Oxford Against Immigration Detention (OAID) has taken over where CCC left off in spring 2019. See its website.

The closure of Campsfied is a victory for Close Campsfield and for the much broadened national movement of opposition to immigration detention. 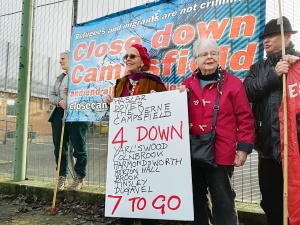 Close them all down

Next steps for the Campaign

We will continue as the Campaign to Close Campsfield and End All Immigration Detention  until at least May 2019 (the month given in the November 2018 government statement about the closure of Campsfield).

Haslar, Dover, The Verne and Campsfield detention centres have closed but asylum seekers and other migrants are still detained at Yarl’s Wood, Colnbrook, Harmondsworth, Morton Hall, Brook, Tinsley and Dungavel. While immigration detention continues to exist, we will continue to campaign against the injustice of administrative detention.

We will hold a stall at Carfax on the last Saturday of each month to continue to call for an end to all immigration detention.

If you would like to keep in touch, email closecampsfield@riseup.net

The last monthly demonstration at Campsfield took place on Saturday 29 December 2019, after the final detainees left earlier in the month.

25 YEARS TOO LONG: CLOSURE OF CAMPSFIELD TO BE MARKED WITH PROTEST AND REFLECTION IN OXFORD THIS WEEK

On 29 November 1993, the first minibus full of immigration detainees arrived at Campsfield House IRC. Oxford resident Bill Mackeith, joint organiser of the Campaign to Close Campsfield, was one of twelve protestors who came to meet them. He was there, in shame and solidarity, to protest a system that (still) allows migrants (including refugees and asylum seekers) to be held without charge, time-limit or proper judicial oversight, in a network of prisons run for private profit.

A quarter of a century later, campaigners will mark the anniversary with a couple of free public events: an evening of reflection and discussion on 25 years of resistance to Campsfield on Thursday 22nd November (7pm, Oxford Town Hall), featuring testimony from an ex-detainee and a new exhibition about the campaign, and a lively protest outside Campsfield itself on Saturday 24th November (12 noon, at the main gates).

This year’s anniversary demonstration will be different as the campaign’s twenty-five year anniversary coincides with the welcome news that Campsfield is finally to close. Bill says, ‘We think soberly of all the harm done, the lives damaged or destroyed, and those lost – 18-year-old Kurd Ramazan Kamluca in June 2005 and Moldovan Ianos Dragotan in August 2011 – at Campsfield over the past twenty-five years.’

Throughout this time, detainees have protested about their conditions of imprisonment and for their release, and campaigners outside have sought to amplify their voices. There have been regular (monthly) demonstrations, rooftop protests, hunger strikes, interventions from MPs and prominent academics (that saw the expansion of Campsfield shelved in 2015) – and even a solidarity march to London.

In recent years, initiatives like Detention Unlocked, Freed Voices and the These Walls Must Fall campaign have focused public attention on the myriad of human rights abuses stemming from the current system. In 2015, an all-party parliamentary inquiry into the use of immigration detention warned of “significant mental health costs for detainees, as well as considerable financial costs to the taxpayer”, and demanded a 28 day time-limit. This report was welcomed by Amnesty International but has yet to be implemented by the government. In Oxford, campaigners have vowed to keep fighting until “barbed wire Britain” is a thing of the past.

Statement from Bill MacKeith, joint organiser, on behalf of the campaign:

‘The announcement that Campsfield is to close is long overdue. But the misery and injustice of immigration detention continues at Yarl’s Wood, Colnbrook and Harmondsworth, Brook and Tinsley, Morton Hall, and Dungavel. These too have to go. We shall work for that.’

Join campaigners on the steps of Oxford Town Hall for a photograph with the banner at 6.30pm on Thursday 22nd November.

GOVERNMENT’S ANNOUNCEMENT THAT CAMPSFIELD WILL CLOSE

‘”The announcement that Campsfield is to close is long overdue.

‘We think soberly of all the harm done, the lives damaged or destroyed, and those lost – 18-year-old Kurd Ramazan Kamluca in June 2005 and Moldovan Ianos Dragotan in August 2011 – at Campsfield over the past twenty-five years.

‘The name of our campaign is Campaign to Close Campsfield and End All Immigration Detention.

‘With Campsfield next May, four detention centres will have closed in four years. The number of people in detention is currently down some 20 per cent from the peak in 2015.

‘But the misery and injustice of immigration detention continues at Yarl’s Wood, Colnbrook and Harmondsworth, Brook and Tinsley, Morton Hall, and Dungavel. These too have to go. We shall work for that.’

At the end of this month, to mark the 25th anniversary of the opening of Campsfield, we shall be organising a big demo at Campsfield on Saturday the 24th, but also a special event at 7pm on Thursday 22nd November in Oxford Town Hall, where people who have been involved inside and outside Campsfield in resisting detention will tell their stories and talk about where next.

25th November 1993: First immigration detainees brought from Harmondsworth detention centre. Twelve demonstrators meet minibuses at Campsfield main gates and demand freedom for detainees. Ever since, people inside and outside the centre have demanded:
Close Campsfield and end all immigration detention 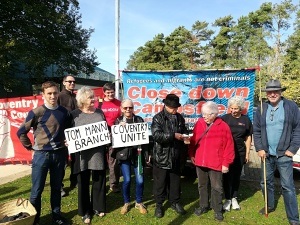 Many thanks to Unite Tom Mann branch, Coventry, for the £500 cheque presented at the monthly demo at Campsfield on 29 September.

There will be an anniversary demo on Saturday 24th November 2018, marking 25 years since the first detainees arrived at Campsfield.

Showing of extracts from

followed by speakers including:
Rev Nathan Ward, former senior manager with G4S.
Caroline Bannock, Community Editor of the Guardian, part of the team investigating and reporting on the Windrush generation and their families mistreated by the Home Office and in some cases detained and deported.
Plus local print and broadcast journalists.

Lynn Degele, delegate from the Oxford branch of the National Union of Journalists, proposed a motion at the NUJ national Delegate Meeting in Southport last weekend demanding the right of access for journalists to immigration detention centres such as Campsfield, near Oxford.

The resolution was carried unanimously by over 120 delegates, and the union’s National Executive Council is now charged with seeking changes to the law and regulations to secure its demands.

The Campaign to Close Campsfield is holding its monthly demonstration at Campsfield main gates this Saturday at noon. Bill MacKeith, joint organiser of the campaign said:

Last September’s BBC Panorama exposure of abuse by G4S guards in Brook House detention centre near Gatwick was only possible because of the bravery of one detention centre guard and hidden camera techniques. END_OF_DOCUMENT_TOKEN_TO_BE_REPLACED